Space Battleship Yamato is a Japanese science fiction franchise that began in 1974 as an anime television series and has expanded over more than four decades into two sequel series, a reboot series, multiple anime films, manga, online comics, a live action movie, and other media. At the center of all these stories is the Yamato, an advanced spacecraft that ventures into the unknown to defend the planet Earth. Space Battleship Yamato is also well known to English language audiences as Star Blazers.

Before the sequel begins, a Space Battleship Yamato 2202 compilation film, The Era of Space Battleship Yamato: Choice of 2202 (宇宙戦艦ヤマトという時代 西暦2202年の選択, Uchuu Senkan Yamato: Iu Jidai Seireki 2202-nen no Sentaku) will be shown. Advance word from the production promises new video footage, and suggests a documentary style to the film [5]. 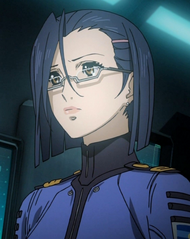 Lieutenant Kaoru Niimi is a United Nations Cosmo Force officer serving in the space battleship Yamato's science and technology division, responsible for intelligence and for technical and tactical analysis. She also takes on the role of ship's counselor. During Yamato's voyage to Iscandar, Niimi conspires to launch a mutiny to end the mission and return to Earth. Several years later, she contributes to the construction of the experimental ship Ginga and serves as a member of its first crew. Read more...