Edit
watch 01:36
We're Getting Mutants in the MCU - The Loop
Do you like this video?
Play Sound

The Andromeda-class is a United Nations Cosmo Navy warship class. Initially designated as Advanced Ability Armament (AAA) ships, the class shares their name with Andromeda, the lead ship of her class. The class is the immediate follow-up to the space battleship Yamato, further developing wave motion energy and other technologies that were used on their predecessor. The Andromeda class represents the Earth Federation‘s policy of presenting a robust response to alien threats, and leads Earth’s defense against the Gatlantis Empire’s invasion of the solar system.

Andromeda-class ships are the most heavily armed vessels in the Cosmo Navy fleet when they entered service in 2202. Their most prominent and devastating weapon is the dual barrel wave motion gun located in the ship’s bow. Unlike the wave motion gun designed for Yamato years earlier, the Andromeda-class’s gun can be fired in a dispersion pattern at dozens of smaller targets spread across a wide area of space, and not just single large objects (“AD 2202 - Revive, Space Battleship Yamato”). For more conventional combat, battleships in the class are armed with a broad array of energy and projectile weapons in various sizes for offensive and defensive use. Among these are triple-barrel positron shock cannon turrets, somewhat smaller than Yamato’s shock cannons but capable of firing at a much higher rate[1] (“Clash! Yamato vs. Andromeda”).

A carrier variant of the Andromeda class sacrifices some conventional weaponry to accommodate up to one hundred eighty Cosmo Falcon fighters, Cosmo Tiger II fighters, or a mix of the two. Fighters are catapulted from four rows of launch and landing bays on a large flat top superstructure mounted on the back of the bridge tower, with each row capable of launching six fighters at a time; a similar series of bays is mounted on starboard and port side bulges in the main hull. At full capacity, twenty-four fighters can be launched at one time from each side, allowing the carriers to rapidly deploy a complete fighter force[1] (“Clash! Yamato vs. Andromeda”).

Defenses on Andromeda-class ships include wave motion shields. These shields are comparable to those deployed by Yamato, and are strong enough to stop and deflect objects of roughly the same size in head-on collisions (“Clash! Yamato vs. Andromeda”).

Ships of the Andromeda class are capable of long-distance warps, giving them operational capability well beyond the outermost fringe of the Milky Way Galaxy (“AD 2202 - Revive, Space Battleship Yamato”). Warps can be performed inside planetary atmospheres. Flight within atmospheres is also possible, assisted by fixed wing-like structures on the bow. Ships can be launched vertically from ground positions on long rails (“Tension – Reach the Embassy on the Moon”).

Despite being the largest vessels in the UNCN fleet and having two bridge sections, Andromeda-class ships require relatively smaller crews due to an increase in automation.[1] Equipment takes up a significant portion of the main bridge, and seats are provided for only four individuals: the commanding officer’s station at the back of the bridge, the executive officer’s station immediately forward beneath the window and main viewscreen, and two support stations on the port and starboard sides (“Clash! Yamato vs. Andromeda”).

Following the Battle of Saturn, new variants of the Andromeda-class were swiftly built and sent into combat. Chief among these was the Black Berserk Battalion (BBB) battleship series, operated almost entirely with automation except for a single human crew member serving as captain; life support is eliminated, forcing the captain to wear a space suit. Additional thruster nozzles are placed around the hull to give the series dramatically increased speed and maneuverability, the hull is painted black. The Andromeda, which was heavily damaged at Saturn, was mostly rebuilt according to BBB specifications and given a new registry number. Both Andromeda and the BBB series can be further enhanced by mooring Dreadnought-class battleships to the port and starboard sides[1] (“Yamato in Crisis - The Devil's Alternative Once More”, “Escape from the Nightmare!”).

At least four carrier-type Andromedas were licensed to the Great Garmillas Empire and its fight with the Earth Federation against Gatlantis. These CCC (Crimson Camaraderie Carrier[2])-designated carriers are essentially identical to those built for the Cosmo Navy, but are equipped with Garmillan electronics and are painted red and black with Garmillan script on the hull. Instead of Cosmo Navy fighters, launch bays are reconfigured for Garmillas fighter types. Larger support craft, such as 3 armed DBG.88 Garont planes and 8 FWG.97 Doshira torpedo bombers, can be moored to the external flight deck[1] (“Escape from the Nightmare!”, “Yamato, Attack the Comet Empire!”).

In addition, a new series of “Advanced Ability Armament Advanced Stage” ships underwent development. These included the Amaterasu（There is no evidence that the ship can fire cannonball）, Aquarius, and new Garmillan variants. The Aquarius and Laboratory Aquarius were experimental versions of the Andromeda-class with a superstructure style similar to the Ginga. The Amaterasu was an independent assault battleship that carried an increased armament of ten turrets to carry out hit-and-run attacks. She also came equipped with a thrust point to reinforce its wave motion shields to allow the ship to ram into opponents. The new Garmillan Andromeda-class ships featured the same layout of a standard Cosmo Navy Andromeda, but the style of the ship such as the plating and weaponry were reminiscent of Garmillian ships such as the Gaiderol class battleship. They were initially equipped with reflection satellite cannons but these were replaced with wave motion guns.[citation needed]

Following the near-total devastation of Earth caused by the Garmillas-Earth War, the Earth Federation recognized the need to secure its position against any potentially hostile civilizations, beyond simply upgrading its existing ship designs. The Andromeda class became the first in a new and more powerful generation of warships. By equipping the class with wave motion weaponry, Earth gained a dramatic military advantage, but at the cost of breaking the treaty with Iscandar that banned such weapons. The Andromeda (AAA-01) became the first to demonstrate this military potential, by almost completely wiping out enemy Gatlantis ships in a single blast of its dispersion wave motion gun at the Battle of the Eighth Floating Continent (“AD 2202 - Revive, Space Battleship Yamato”).

On December 8, 2202, two additional battleships and two carriers were unveiled at a public ceremony (“Tension – Reach the Embassy on the Moon”). These four and Andromeda participated in a live fire exercise near Jupiter days later, alongside more than a dozen Dreadnought-class battleships. During the exercise, Andromeda was re-routed to confront the space battleship Yamato, which had been taken on a rogue mission. Yamato was able to successfully defend herself against Andromeda‘s intense shock cannon fire, and both vessels left unharmed after a head-on collision, protected by their wave motion shields (“Clash! Yamato vs. Andromeda”)

The five Andromeda-class ships led the Cosmo Navy’s initially successful defense against the Gatlantis Empire’s invasion at the Battle of Saturn months later, fighting back the enemy fleet until the appearance of the empire’s Ark of Destruction space fortress. The carrier Apollo Norm was sunk in an act of self-sacrifice saving the heavily damaged Andromeda (“Yamato in Crisis - The Devil's Alternative Once More”). Antares transported evacuees from Yamato to safety after the battle (“Heir to the Yamato, Her Name is Ginga”). Seeking to more heavily reinforce the Cosmo Navy and to compensate for the loss of so many of its own personnel, production of BBB-series automated Andromeda battleships, AAAAS series, and CCC-series Garmillas carriers was stepped up considerably. The shipyard was located inside a dimensional time fault, which allowed months of full-capacity manufacturing to take place in a much shorter span of time. Led by the repaired and modified Andromeda, the allies launched their next assault against the Ark of Destruction (“Escape from the Nightmare!”).

At the Battle of Iscandar (Oct 2205), the debris of at least two Andromeda-class ships(one of which named Arcturus CXCI) built in the future, was found inside the Autoplanet Gorba by the 65th Escort Squadron.

Named Ships of the Class[] 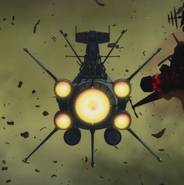 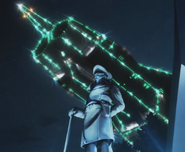 Four ships of the Andromeda class prepare to launch.

The bridge is relatively simple and is equipped with few stations, due to increased automation and other advancements.

In addition to a large dorsal fighter bay on the carrier type, port and starboard bays can open to launch fighters in four different directions simultaneously.

Interior of a carrier fighter bay before launch.

Additional fighters and support craft can be transported directly on a carrier's upper flight deck. 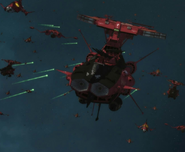 The carrier Neu Balgrey, with two other Garmillas carriers visible behind and to port and starboard.

Community content is available under CC-BY-SA unless otherwise noted.
Advertisement